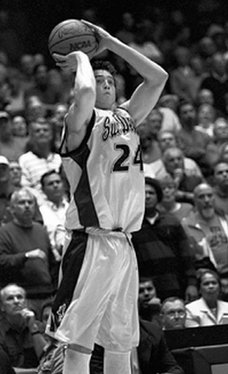 Justin Allen grew up in Malta, Illinois (population 800) and graduated from Malta high school (student enrollment 78) in 1999 where he was a two time All-State Basketball Player and a Three Time Little Ten Conference All-Conference performer. During his four years at Malta High School he scored 2,143 points and pulled down 929 rebounds, setting school records in both categories After finishing his career at Malta High School, Justin earned a basketball scholarship to Arizona State University in the Pac-10 Conference.

Justin was a member of the Arizona State University basketball team for 5 seasons (2000-2005). After a promising freshman season he was diagnosed, in the summer of 2000, with Hodgkin’s disease, or type of Lymphoma Cancer. He underwent 6 months of chemotherapy and 8 weeks of radiation. During this time he had an awakening experience that will forever have changed his life. One minute he was an 18-year-old basketball player with dreams of playing for a championship and suddenly he was facing the biggest challenge of his life. Justin shifted his attention to battling not on the basketball court, but instead battling for his life. After a year long battle with cancer Justin learned that there was no sign of the tumors that once had filled his body and he immediately set his sights on a return to the court. The very next season Justin found himself on the court and in a Sun Devil Uniform. Justin played another three years at Arizona State going to the NIT tournament 2 times and the final 32 in the NCAA tournament in 2004.
During his time at ASU Justin was awarded:

Upon graduation Justin spent five years playing professional basketball internationally in places such as Argentina, Australia, Japan, Venezuela, Kuwait, and South Korea. In 2009 Justin ended his playing career and started coaching club basketball for Arizona Premier Basketball Academy, under the leadership of Russ Pennell (U of A, Grand Canyon University, and Phoenix Mercury Head Coach).  After two years coaching for Arizona Premier Justin created his own basketball training and club team business, Arizona Passion4ball, who partner with Arizona Magic.  Recently Justin has formed a motivational and inspirational company called, Chase My Passion, which is now featuring a children’s book that is a based on Justin’s Life.  Justin is a very passionate person in life and believes in paying it forward.  In 2013 Justin has taken over as the Director of Basketball operations for the Arizona Magic and is confident that with this new position he will be able to utilize his passion for basketball and life to inspire others to utilize the game of basketball as a vessel to develop, mature, and pursue their own unique journey.

Justin has been such a positive influence on my son, both on and off the court. In the short time Justin coached Hayden, his skills, confidence, and basketball IQ reached a new level. Justin encouraged, motivated and made sure Hayden was ready to pursue his dream of playing college-level basketball. Justin was Hayden’s advocate throughout the recruiting process and was the first person Hayden called when he received his first college offer. Justin is an outstanding individual, coach and mentor, all a direct reflection of his outstanding overall character. My only regret is not finding Justin earlier than Hayden’s final season.

Justin has trained my son Dylan for many years. He works him hard but is always encouraging and positive in how he teaches the fundamentals of the game. Justin is team oriented in his approach with the players he trains and follows up with them often after games and takes time to talk to them and see how they are doing. It is more than an hour training session, it is a relationship. Justin is the best shooting teacher around, his technique and knowledge of the Shot is second to none. Glad we have known him for the years we have.

Thank you for your help with my son. Thanks to your guidance and coaching skill; he went from not making the team as an 8th grader, to being a starter as a 9th grader ! Your passion for the game has motivated him to be the best player he can be.

Justin worked with Kyle during club season and during the off-season for skills work and technique. He has an always positive attitude, with high expectations of the trainee. He has the perspective of a player coming from the high school ranks into D1 college ball, then playing professionally for varied teams and coaching styles. I heartily recommend Justin as a trainer and coach.

Coach Allen is truly passionate about the game game, but also the success of his players. He prepared me for my senior year of highschool basketball. He will do whatever possible to make a player better and help him with his goals. Coach Allen is highly regarded in the basketball community, and knows and communitcates with coaches and players throughout the United States. he will do his best to get a player to the next level. My parents and I are extremely grateful for coach Allen and all that he has done for me.

It’s difficult to find a coach who can match the devotion and passion Coach Justin has for the game of basketball, but most importantly his player’s futures. Work with him not only installed a level of intensity in me, but it brought back the enjoyment that many players miss now days.

My son Bryan played with Justin’s team Passion4ball and had such a wonderful experience. Justin is not only a great coach but a wonderful person and mentor. He helped Bryan improve his skills and also helped him with his recruitment into a university. He spent his own time developing a website for Bryan and has spent endless hours reaching out to coaches on Bryan’s behalf. We have truly been blessed to have him in Bryan’s life.

After years of disappointment in the quality of basketball coaches in the Valley, I finally found Justin Allen. Justin not only knows the game and what it takes to improve your skills to be competitive, he also cares about the development of the player as a person. He is tenacious about correct form. Justin focuses on the players development from the ground up. If your form is not consistently done correctly, he works tirelessly at establishing it. Not only has Justin improved my sons basketball form and skills, he has become an invaluable mentor to my son and a respected role model in our lives. Justin does not train for the money Justin trains for the Passion.