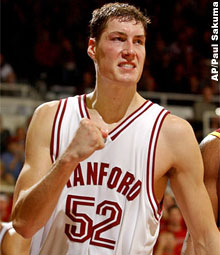 Coach Matt Haryasz is a Arizona local high school legend, leading his Page High School team to a state championship and a 29-2 record his Senior year in high school.   Matt Averaged 25 points, 12 rebounds and six blocks during his senior season at Page High School,  and set a school record hitting 70 percent from the floor .  Matt was voted the Arizona Republic Player of the Year, Gatorade Player of the Year, and the Navajo Times Four Corners Hoops Player of the Year , Student Sports first team All-Region (Southwest), an Arizona all-state, all-region, all-league selection, and a named McDonald’s All-American finalist.  After High School Matt earned a scholarship to play basketball at Stanford.  During his time at Stanford Matt became one of the elite players in the Pac-10 conference (which at the time was the number one conference in the nation).  During his time at Stanford Matt was a 2005 honorable mention All-Pac 10 and in 2006 was named 1st team All Pac-10.   After graduating from Stanford Matt played 6 years professional in the United States, Europe, and Asia where he collected even more awards as a professional.   Matt has returned to the states and looks to start his coaching career.  Matt is a very talented athlete, with a great head on his shoulders, who has a lot to share with players on and off the court.