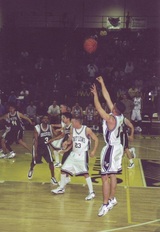 Michael Romero  was born in Tucson, Arizona but grew up in the small town of Silt, Colorado. Mike graduated from Rifle High School where he played point guard for the Bears Basketball team. After high school Mike attended Fort Lewis College (NCAA D2) where he walked on to the Men’s basketball team before eventually earning a scholarship. Mike played for the Skyhawks from 1996 to 2001. In his senior year with the Skyhawks Mike earned All-Conference Honorable Mention in the Rocky Mountain Athletic Conference.

Mike has a Bachelors degree in Business Administrations and moved to Phoenix to start his career. After 6 years in the business world he could not deny his passion to be around basketball any longer. He became certified as a high school business teacher and in 2007 was hired to teach business and coach basketball at Tempe High School. Mike is currently the head JV basketball coach at Tempe High school. While teaching and coaching at Tempe High, Mike also earned his Masters degree in Psychology from the University of Phoenix while being a husband and a father.  Mike chose to earn his degree in psychology because of his passion to positively influence his children, students, and players in their psychological development hoping to help them become successful strong willed individuals.

Along with Mike’s  passion for coaching the game, he still love to play. For the last 4 seasons he has  competed against the WNBA Phoenix Mercury during practices as part of the male practice squad the Mercury use to help improve the team. It has been a great experience to learn from the coaching staff and compete against great players like Penny Taylor, Candice Dupree and Diana Taurasi. This experience has added to his already vast knowledge of the game and confidence as a head coach.